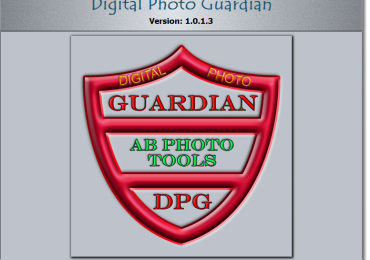 It’s been a while, and I’ve been very busy. But more on that later.

In the last few months, Topaz Labs, and DXO have issued updates. This post is to give you low down on these and to mention a very special new release…

DXO have been busy. First, they keep on improving DXO Photo Lab, and that is no mean feat. It’s as close to being a perfect RAW converter as there could be and how do you improve on perfection?

First, they keep adding support for new RAW formats. For most tools, that’s just updating to the latest version of LibRaw, but that’s not the case with DXO. If you didn’t know already, DXO has the best support for cameras AND lenses. So, when DXO say they support a new RAW format, they mean they support the new cameras AND lenses. It’s an enormous amount of work for DXO to do this, but the results speak for themselves.

DXO are smart. They know you may already use Lightroom, Adobe Camera Raw, Capture One, or Luminar, but are missing out on DXO’s brilliance. So what do you do? You release a product that lets you have the best of both worlds. DXO + Lightroom or DXO + Luminar, etc. It’s compelling. The best of everything and no downsides! Here’s why…

In my tests, I have found that DXO produces the sharpest and cleanest RAW conversions. Its RAW conversions know about the camera AND lens you use and produce optimal results from them. Its noise reduction is the absolute best when dealing with a RAW image.

But you don’t want to move away from your favourite tool. Maybe you have many presets for it and they are an integral part of your workflow. DXO Pure RAW is ideal for you – it takes your RAW image and produces a linear DNG that your current tool can process. But the RAW data in this DNG is purer, better and sharper than the original RAW file, as it has had the DXO magic applied to it. It really is the best of both worlds. Look at this example: 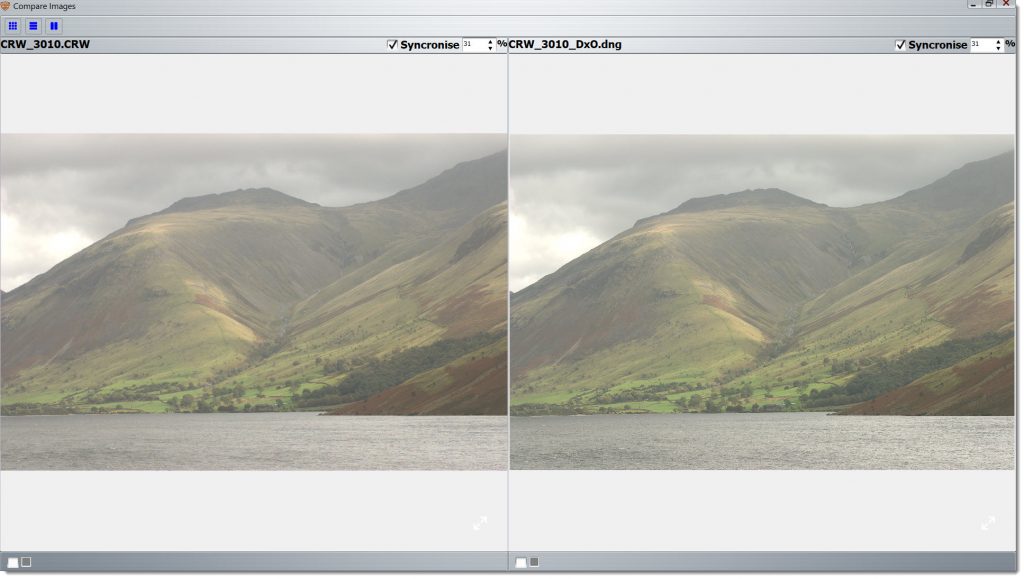 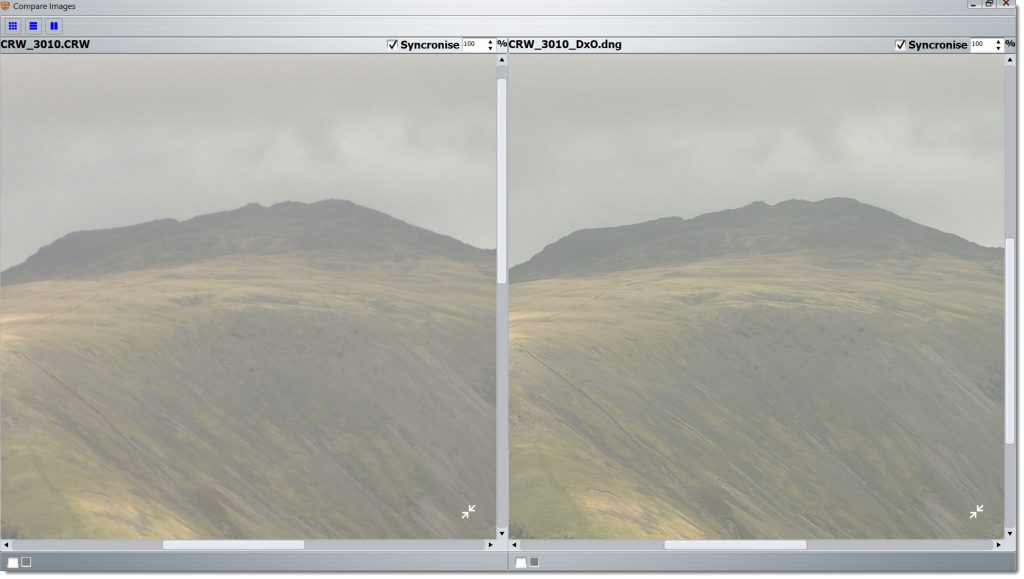 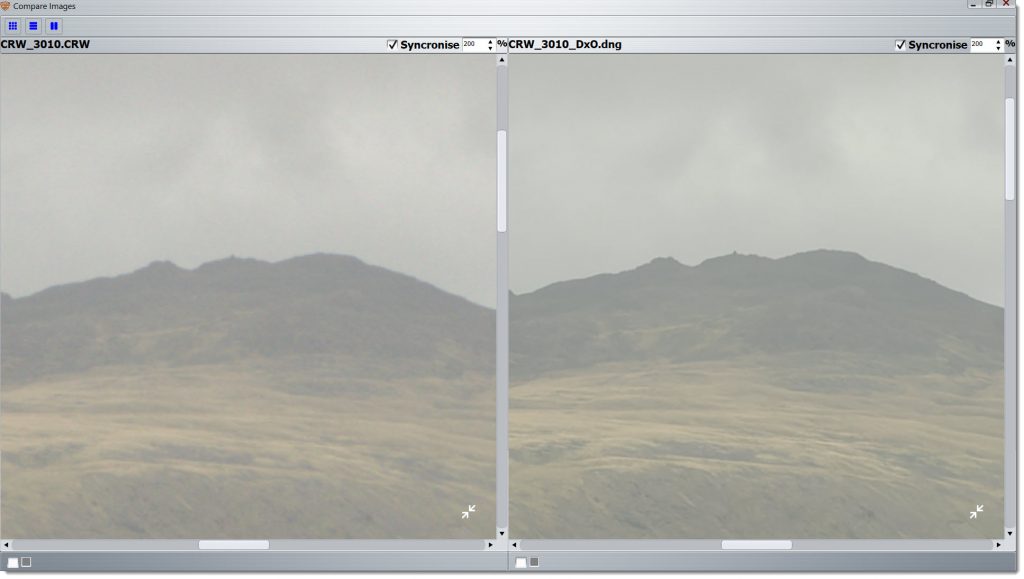 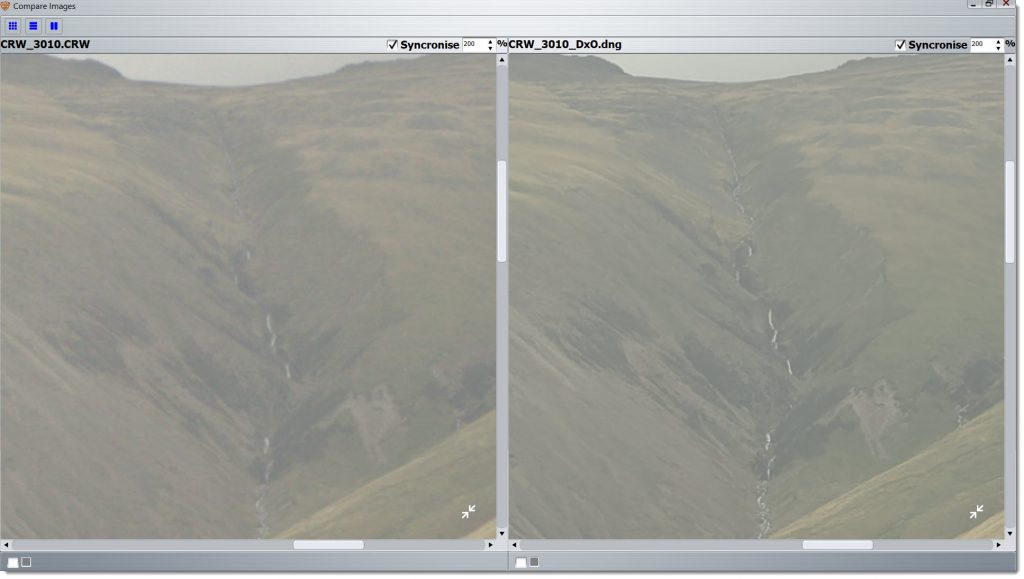 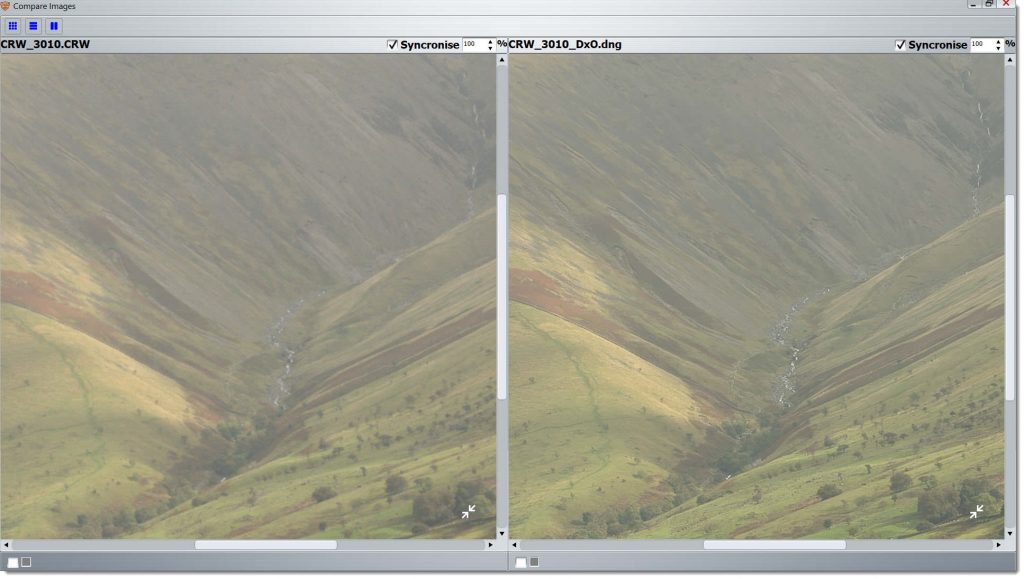 Contemplate the comparison images. On the left is the unprocessed RAW file, on the right is the DXO Pure RAW DNG. The colours are unchanged but the purity of the DXO DNG is self evident. Viewed at 200% the results are even more impressive.

With DXO you get the best of both worlds – you still use your favourite tools, but also get the DXO advantage in terms of distortion free, noise free, and precise sharpening. It’s a win all the way.

If you already own DXO Photo Lab Elite 4, there’s no need to get DXO Pure Raw. But, if you are not a DXO user then you should try this. It adds a simple, single step to your workflow and makes everything better than before with no downsides.

Get a free trial from DXO.

Topaz Labs started charging for upgrades a little over a year ago, with the promise that they would focus on improving their tools rather than issuing new ones. Since then, there has been a steady flow of updates to AI Gigapixel, AI DeNoise and AI Sharpen.

These are the ‘must have’ post RAW processing tools. I test everything I lay my hands on and nothing I have tried equals them. In case you’ve not read my previous reviews, here is a brief description of each:

If you need to enlarge a photo nothing, and I mean nothing, does the job better than AI Gigapixel. I’ve used it since version 1 and would not be without it. Every print I sell receives the Gigapixel treatment. Look at this comparison image:

I processed the above sample image in DXO and then did a 2x and 4x upscale in AI Gigapixel. This is an old image (2004) taken on a 6mp camera. There isn’t that much resolution to play with, so it’s a definite challenge. On the left is the original image enlarged to x2 using a standard bicubic process, the kind that ‘regular’ tools use. On the right is the Gigapixel version. Gigapixel’s enlargement is better in every department. It is sharper and has far less noise. At x4 the bicubic version (on the left) is unusable. Gigapixel’s would still print well. How large would the print be? 40 inches wide! Prior to using AI Gigapixel, I thought my ‘legacy’ images were only good for a 12 inch (A4) print. Not now!

Topaz Labs have also issued updates to their Sharpen AI and Denoise AI and there are no better tools than these for post RAW processing sharpening and noise reduction.

DeNoise AI is crazily good. Noise reduction is best done, of course, at the RAW conversion stage. Here, DXO Photo Lab (or their new Pure Raw) is king. However, further editing can introduce noise. Or, you might shoot JPEGs rather than RAW. In these cases, noise reduction software is necessary. My previous tests show that DeNoise AI is almost as good as DXO, which is incredible, given that removing noise after post processing or from a JPEG is a worst-case scenario. For sample images, see my previous reviews.

All RAW images need sharpening and the best way to do it is in three stages:

DXO has option 1 covered and does it better than anything else I have tried. But options 2 and 3 are problematic. We used to just apply a bit of unsharp mask in Photoshop, but it’s not ideal and trying to selectively sharpen an image is time-consuming and error prone.

I’ve had excellent results with Focalblade and there are several sharpening tools out there. My tests show that Topaz Sharpen AI is the best of them all.

Let’s sharpen the results of the x2 image from the Gigapixel test: The results from Gigapixel were already sharp. Previous tests show that Gigapixel often produces images that are sharper than the original! For this test, I let Sharpen AI select its settings automatically. It detected that a small amount of sharpening was appropriate. I’m pleased with the result – it hasn’t introduced noise or artefacts.

Sharpen AI has modules for soft images, out of focus images and images affected by camera shake. It remains the best sharpening tool ever.

If you haven’t tried Topaz’s tools, pop over to their site and try them out…

And now to introduce a totally new tool…

This is the reason this blog has been quiet for a while. I’ve spent a lot of time with the development of a fresh approach to Digital Image Management. Even if you use Lightroom, Exposure X6 or another tool to catalogue your images, Digital Photo Guardian (DPG) will benefit you.

It all began during March 2020. I started a series of blog posts on Digital Workflow and Digital Asset Management. As I assessed the tools I used, and some I didn’t use, I concluded they were great at cataloguing and browsing images. But did they manage them? Nope. When I last used Lightroom, it totally depended on me to manage my images. It was fine if I imported my images using it and only ever moved/deleted images using it. But it was so slow and cumbersome and I far preferred other tools, such as Fast Raw Viewer, to manage image imports.

But that would leave Lightroom’s catalogue out of sync with my PC and I had to manually bring it up to date. Even worse, if I deleted an image by accident (who hasn’t?) Lightroom never warned me about it. I’ve had the frustrating experience of opening a folder in Lightroom, only to find an exclamation mark beside an image thumbnail. Lightroom only told me I had deleted the image when it was too late to do anything about it. My backups usually keep in sync with my image collection and only keep deleted images for a few weeks. The same is true with my online backups. Doing otherwise would cause bloated backups and I’d eventually run out of disk space.

Speaking of backups, no tool I’ve used would tell me if an image needed backing up or could verify the integrity of my backups. True, the backup tool I use is reliable and detects changes to my image collection. But it assumes I won’t ever delete or change my backups and, well, you know how it is. Sometimes I might restore a photo from the backup using Windows Explorer and accidentally delete it in the process. It doesn’t happen often, but once is once too often.

Other tools were worse than Lightroom. They just kept themselves up to date silently. No warnings. No sign that a photo was gone. It’s only when I looked for it, that I would I realise I’d lost it.

I put the posts on Workflow and Digital Asset Management on hold and put on my software developer’s hat. I’ve been a professional software developer since the 1980s. I’ve worked in many industries, including the image processing and management sectors, so I felt it was time to have a crack at this. As the UK went into Covid-19 lockdown, I worked full time on this. I found out why programs don’t actively manage your image collection – it is difficult to do so. Unbelievably difficult.

Why? I’m working on Windows, but the same is true of MACs and even Linux. These are open systems. There’s nothing in them to stop you opening File Explorer and messing things up, one file at a time! If you have a shared computer, then the problem is even worse. Without rewriting the Windows Shell it’s almost impossible to actually manage your files, your digital assets. It is possible to make Windows ask you to confirm changes to folders using a Copy Shell Hook, but not files. They remain vulnerable to accidental deletion.

But it is possible to write a tool that actively monitors your image collection and warns you of changes and missing backups. It just isn’t easy. A program can tell Windows it wants to know about files being added, renamed, moved and deleted. But Windows doesn’t distinguish between copy & paste and adding a file, or cut & paste and moving a file. Windows treats cut & paste as a deletion followed by an immediate creation of a new file. That alone makes managing an image collection really hard. Is it actually a new file, or a moved one? And many programs create temporary copies of images when editing them. You really don’t want to treat these as additions to your catalogue or warn when they delete the temporary image.

Trying to keep up with all the files that are created and deleted by Windows during day-to-day use is time-consuming. A tool that aggressively monitors such changes could really slow Windows down.

I soon appreciated how difficult this task was and why the tools I had tested acted as they did. But I pressed on and today I have released Digital Photo Guardian – Digital Asset Manager for Photographers.

(For a full list of what it can do, head over to AB Photo Tools, my Image Software site.)

I’ve issued DPG with flexible license options and, for a limited time, lifetime licenses are available. Even if you already have an Image Catalogue tool, I think it’s worth trying DPG out. You can download a 15 day trial version from AB Photo Tools.

I’ll be issuing more blog posts and videos showing DPG in action, but for now here are some screenshots… 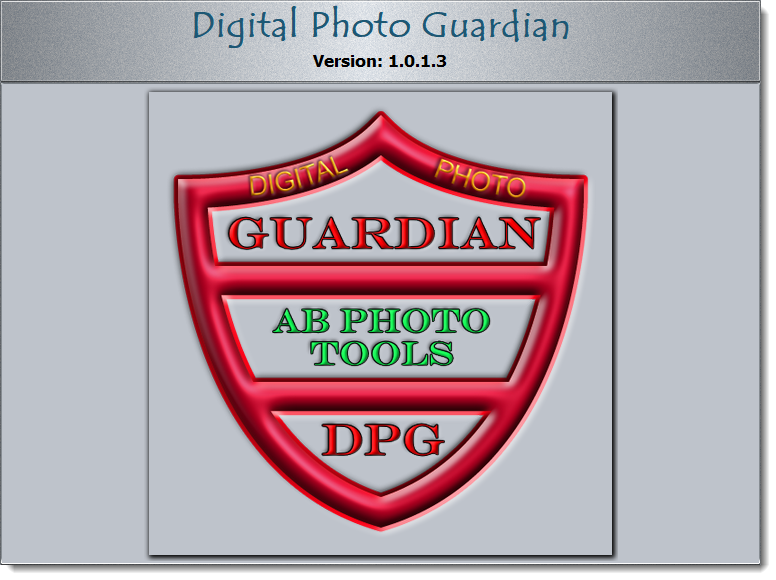 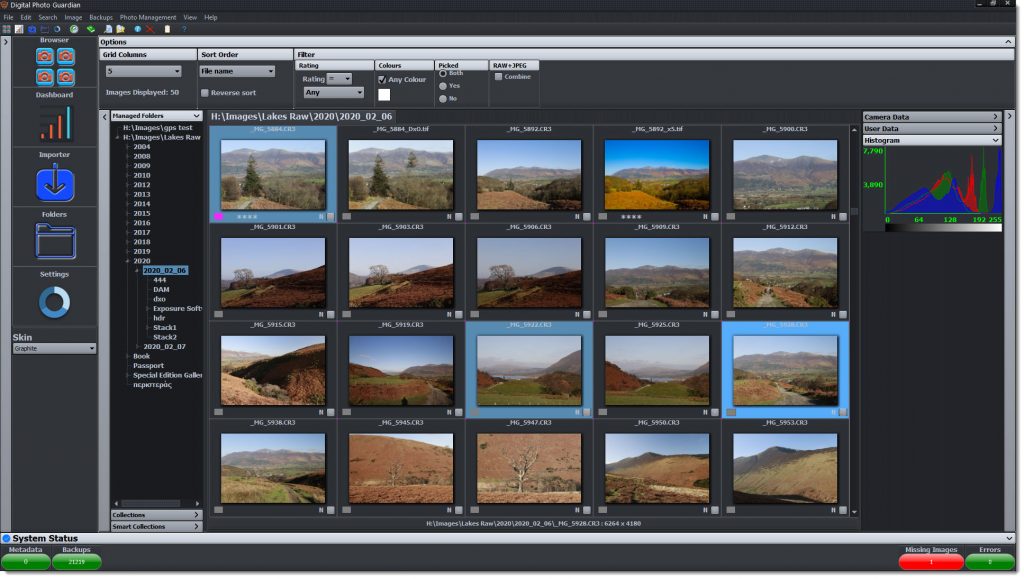 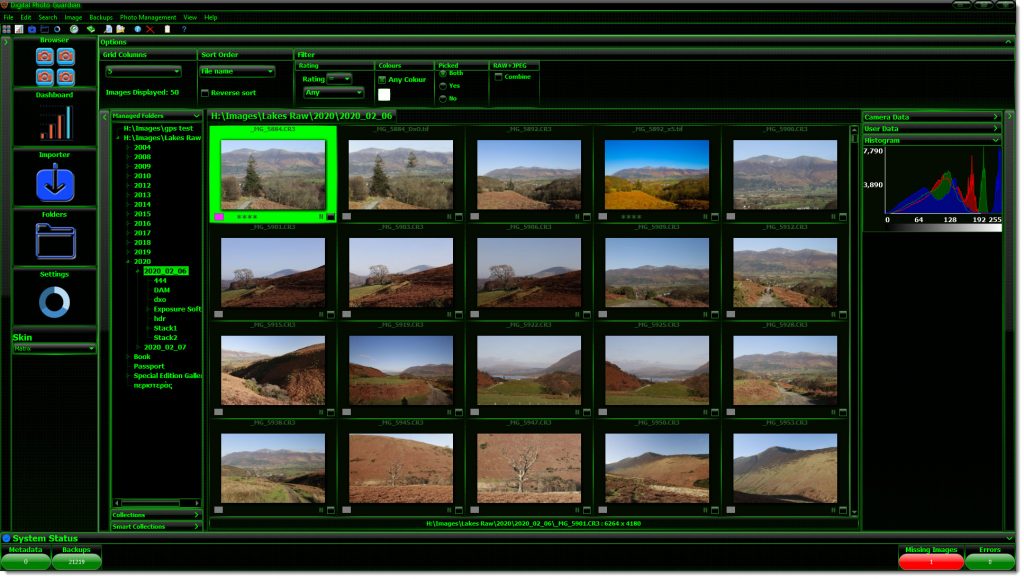 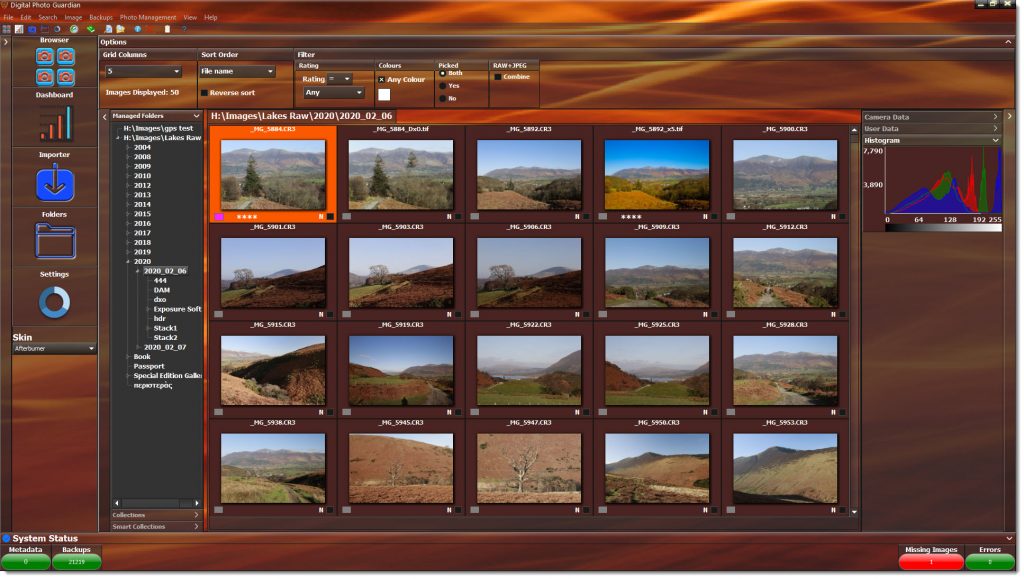 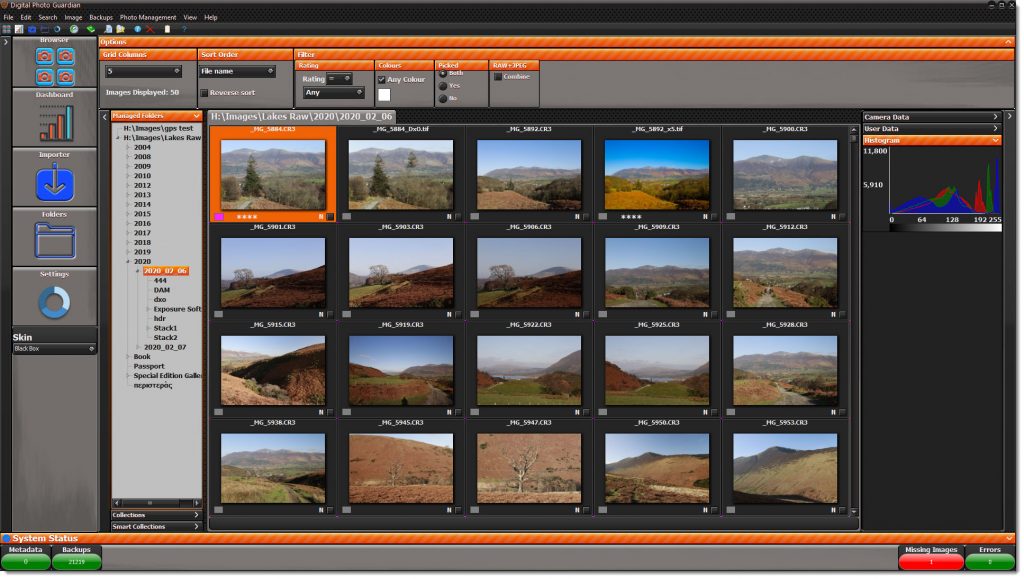 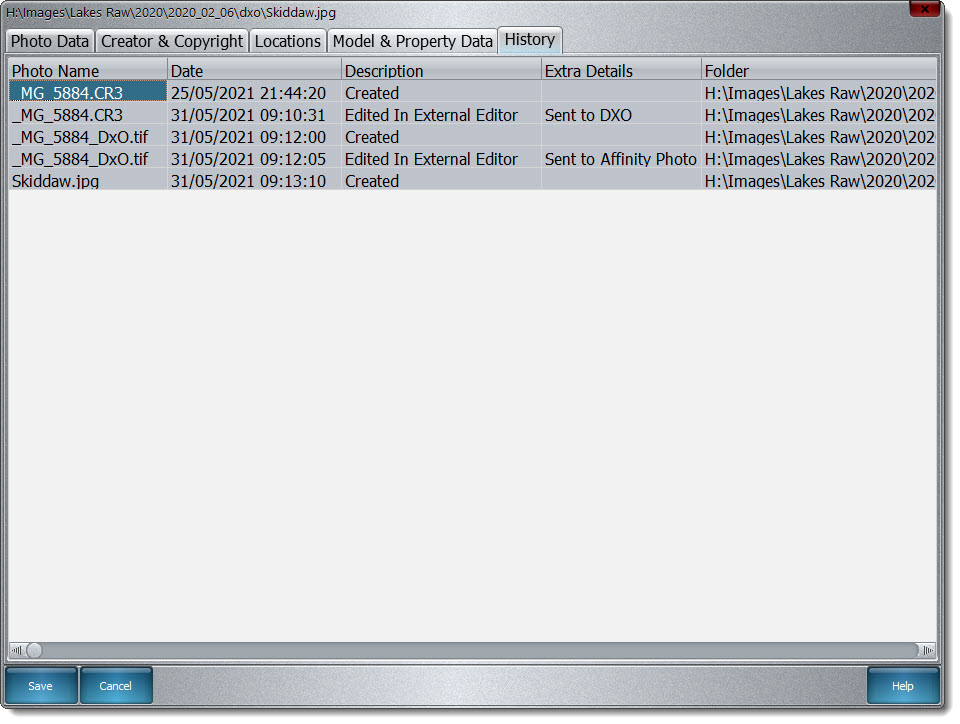 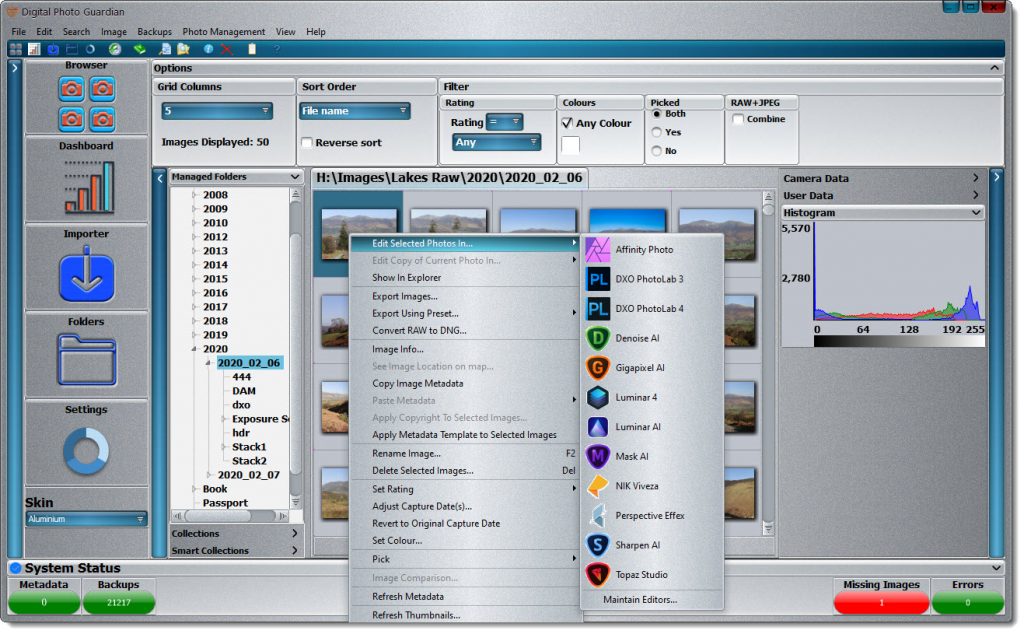 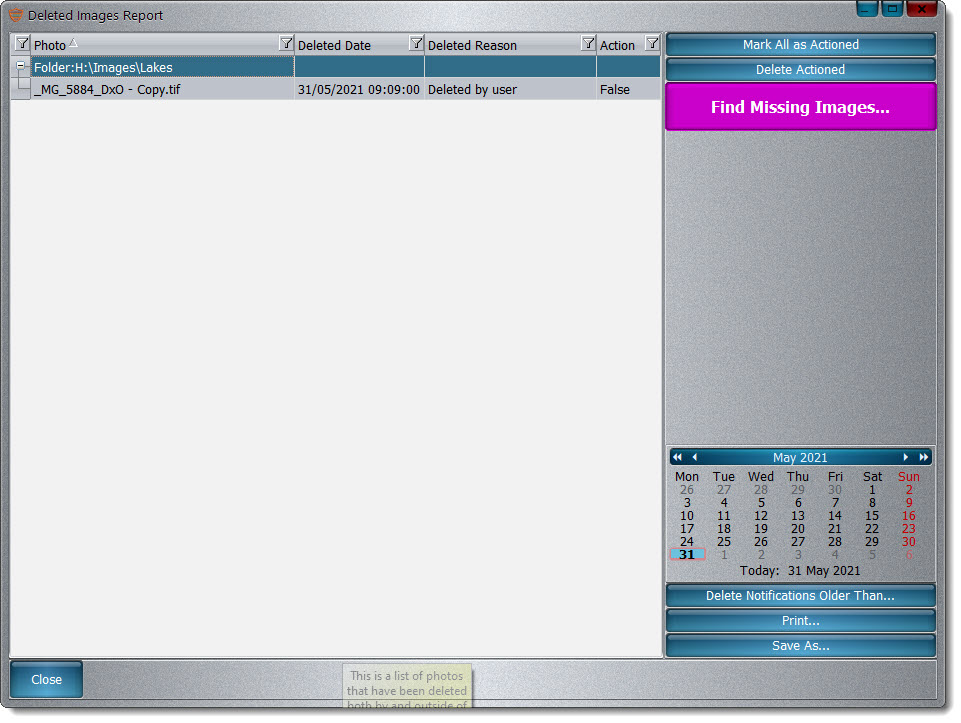 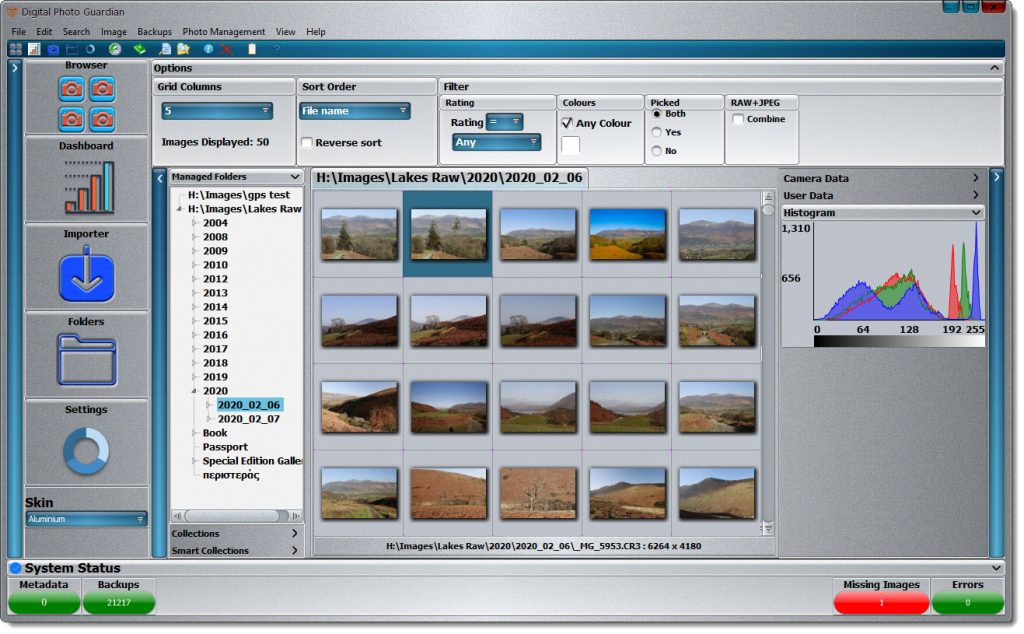 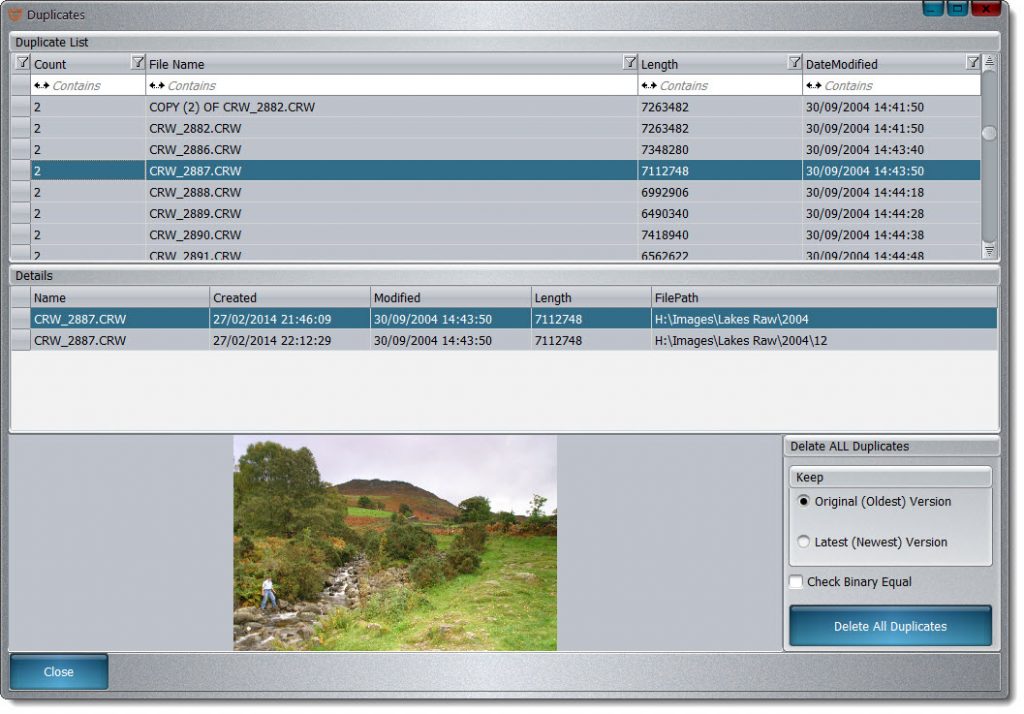 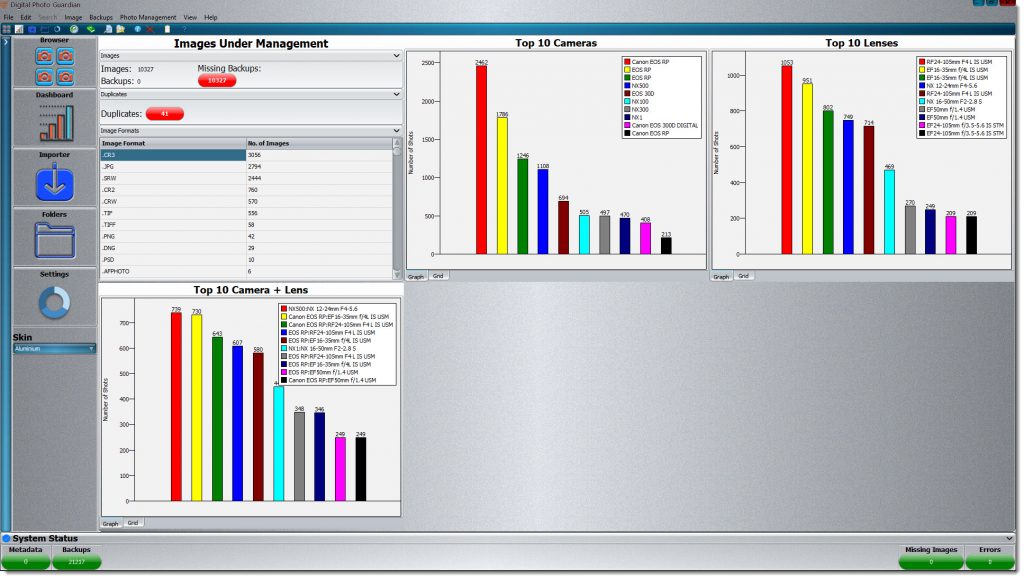 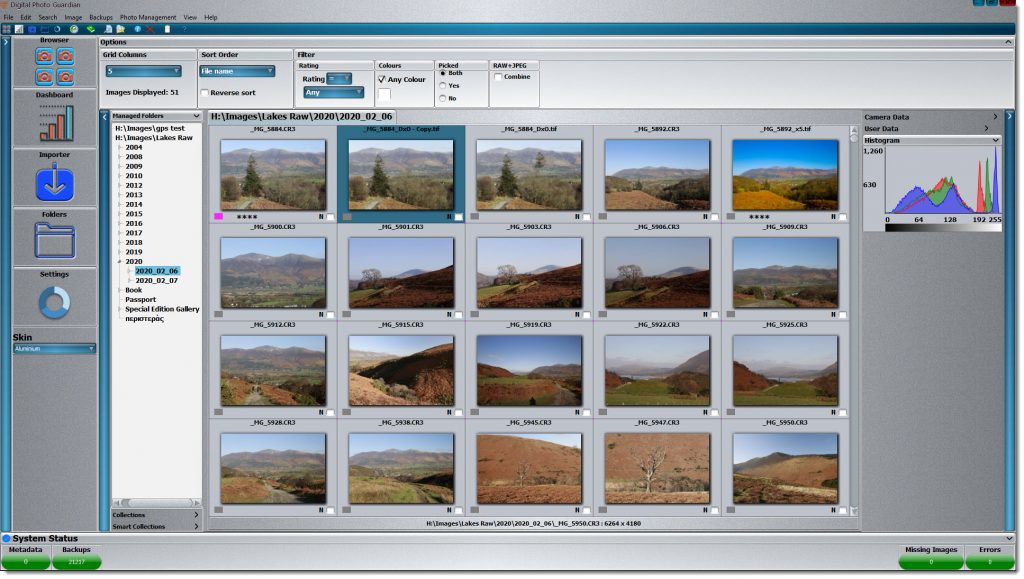 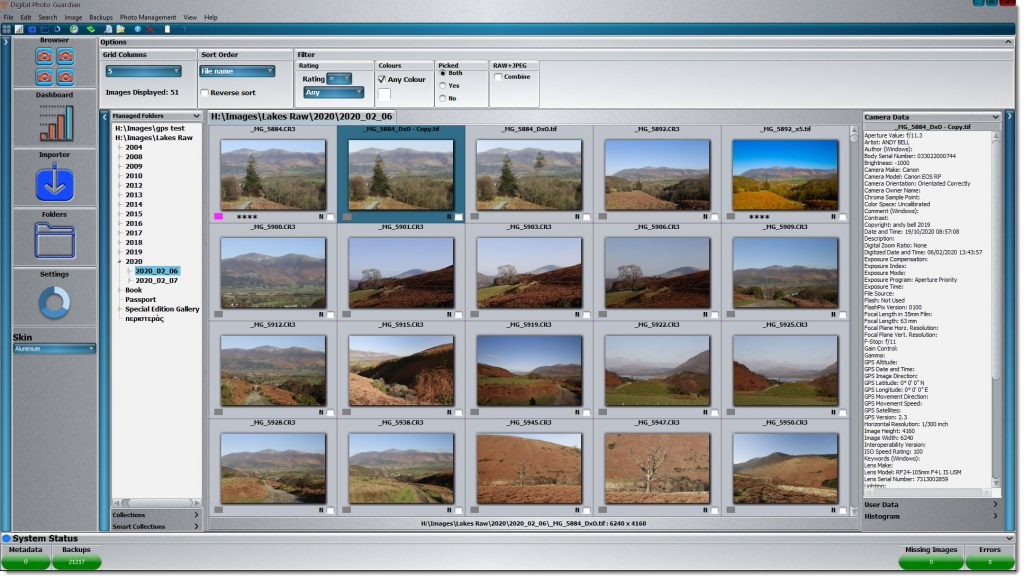 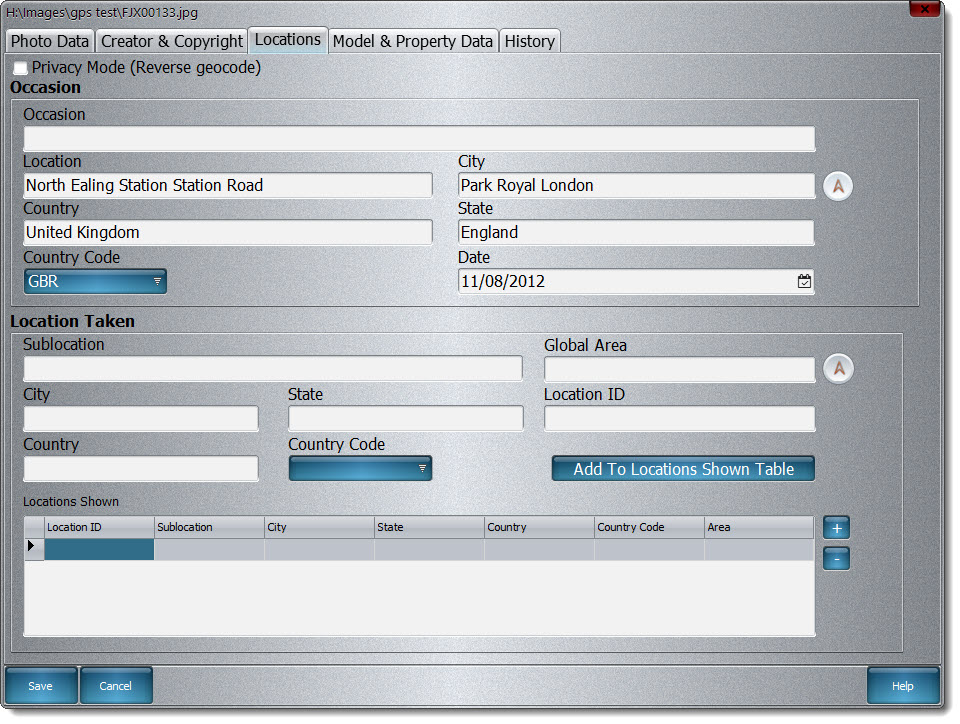 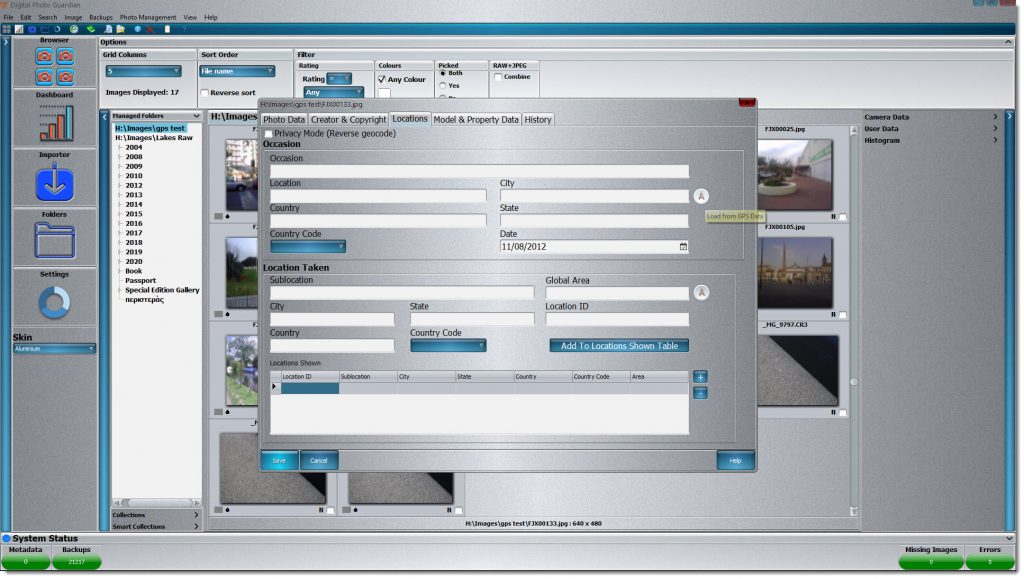 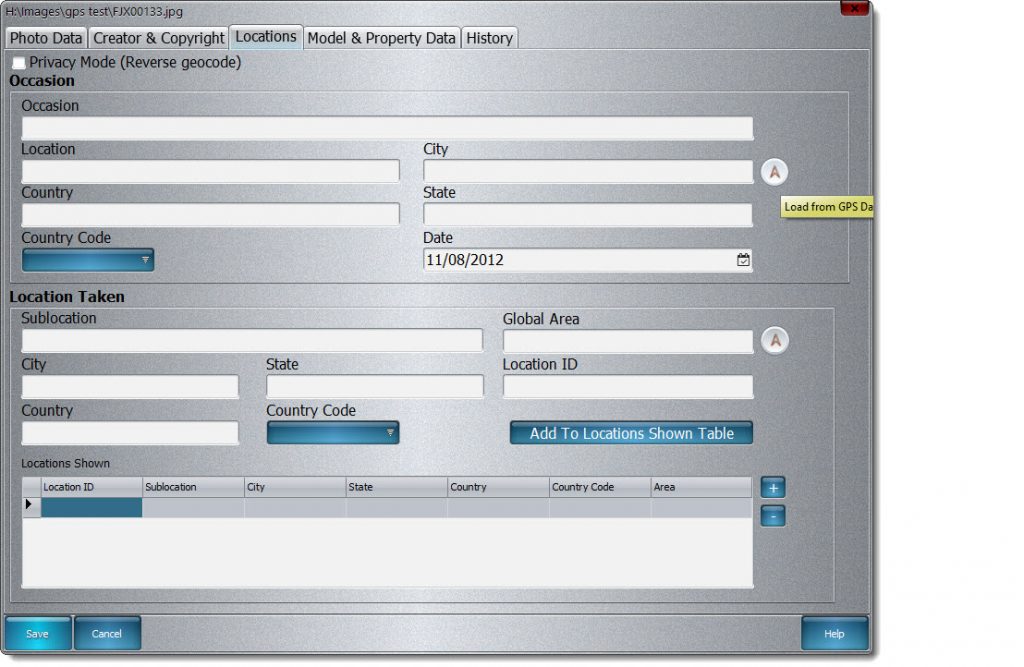 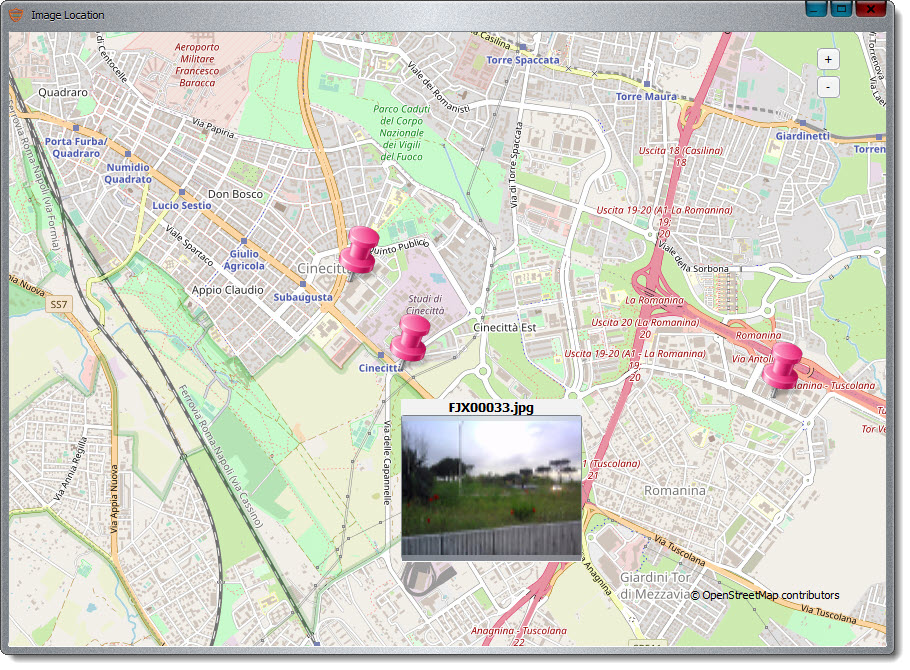